Talk:Welcome to the Sugar Labs wiki

This site is a wiki. It can and may be edited by anyone. Please edit responsibly. We hope that people can contribute their knowledge to the site. Sugar labs hopes to expand and explore with the Sugar UI and OS.

On a slow connection, these load very slowly, leaving big empty boxes one has to scroll past to get to the Community New section. Perhaps the portals should moved down in the page? --Walter 09:34, 28 May 2010 (EDT)

I actually liked the idea very much, but maybe we could set something up where we cache smaller images that are periodically updated? --Walter 23:31, 28 May 2010 (EDT)

Yes, I was afraid that even having them at the bottom of the page would be distracting in the lower-bandwidth case. I also think that, for lack of an announcement to the Local Labs wiki coordinators, they may not have realized that their front page was now on the this front page. I'll copy this section to Bernie and the systems team and, perhaps you can help us identify and forward it to the other wiki coordinators, and then restore the appropriate features as recommended by a fuller collaboration. --FGrose 11:20, 29 May 2010 (EDT)

Maybe using small icons instead of text would be a better treatment for the Local Labs on the landing page? --Walter 18:32, 10 April 2010 (UTC)

Is it decided to drop getsatisfaction in favor or launchpad entirely? I though we were only using launchpad for SoaS? If we are dropping getstatisfaction, is there a plan to migrate the tickets to launchpad? --Walter 15:13, 11 September 2009 (UTC)

Nothing too complicated: simply the idea that reflecting upon one's work--asking oneself questions such as what, how, and why, is a valuable part of the learning process. We should back this assertion up with a literature search. --Walter 13:01, 22 November 2008 (UTC)

I know this is just the beginning, but I think a lot of other people might be as curious as I to know what is happening here on a more regular basis. I also know that most people are used to using email mailing lists for this sort of thing. However, since I maintain a general disdain for email, I thought it might not be too audacious to suggest a News page for the wiki here.

It would be nice to know more about where things are going and follow discussions in HTML. It might also be nice to have regular updates on what Walter and other luminaries are thinking about the direction of this whole thing. I am quite excited about the direction this is taking (although it scared me quite a bit until this site appeared), but the general lack of information makes one uncomfortable. Thus, I am making this request.

See Walter's message from two days ago to the its.an.education.project mailing list. This wiki didn't exist more than about a week ago, but you can read the list archive via HTML here. Cjl 23:17, 20 May 2008 (UTC)

Can I get a copy of this mediawiki theme anywhere? I love it. Will Sugar Labs release it to the public?

ParserFunctions needs to be installed

Although the templates for translations have been copied over from laptop.org, they do not work correctly, since they depend on the MediaWiki extension ParserFunctions, which is apparently not installed/enabled for the Sugar Labs wiki. The symptom of this is stuff with {{#if: in the displayed text (e.g. in the translation box on this main welcome page. This needs to be enabled by an administrator, and may even require installing software on the server.

You can see that no extensions have been installed on this MediaWiki instance by looking at Special:Version and comparing it to version at laptop.org. Dupuy 15:22, 9 June 2008 (UTC)

I am afraid so. The mediawiki manual at http://www.mediawiki.org/wiki/Manual:Preventing_access#Restrict_anonymous_editing explaines how. dfarning 17:55, 20 July 2008 (UTC)

I'm not sure I like the new layout of our key features list, with the icons intermixed with the quips. Maybe we could let the icons float on the right? bernie

I am not crazy about it either. Perhaps people could experiment in their sandboxes with some alternatives. --Walter 14:10, 8 December 2008 (UTC)

Hi Walter! It is a low-end LCD TV, it has only a crappy flash card reader... I uploaded some more photos - see my Sugar gallery! However, I want to make Sugar running onAlix.1C board... I will be fiddeling with it very soon - I appreciate any advice! Kozuch 23:43, 2 January 2009 (UTC)

Does someone know, whether there are any other applications of Sugar rather than its use in OLPC? So far I read it was only ported to Classmate PC 2, but I did not hear about any solutions that might "compete" with OLPCs mission. Kozuch 00:24, 3 January 2009 (UTC)

Need a "click me" on SOAS Image on welcome page

The fact that the large image of SOAS on the top of the wiki welcome page is clickable is not very obvious. Could a "Click Me" be added to it? satellit 4 October 2009

This works on mediawikiwiki:Help:Images: [[File:SugarLabs3x.jpg|right|link=Sugar on a Stick|Click me!]], but not yet on our instance: 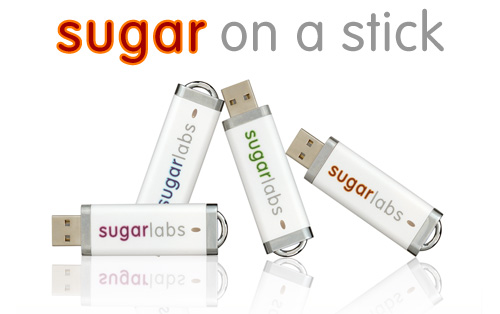 My Math4 related program is actually a game based on a snow ball fight. I have set in stone whether it will be something where you have complete freedom of movement or whether you can only move from one spot to another. The way the later would work is you have the choice of going Back, Forward, Left, or Right (the arrow keys, possible WASD) and once you select on you are shown running to another spot where you can hide behind something and have cover from others (PC) trying to hit you with a snow ball. The Math that will be involved is the Pythagorean Theoreom (Geometry) to determine how far you are from an NPC you may be trying to hit with a snow ball (would be an overhead view); you need to know this because you can only throw a certain distance which is also not set in stone. Additionally the player will need to understand percentages, decimals and factions and an example of this is they may be given a stat: "You have a 50% chance of hitting that player from here." Then they may be given the chance to convert that to a fraction (50% = 0.5 = 1/2) and if they are correct then their chances of hitting the NPC go up, but they need to make sure they are close enough (Pythagorean Theorem) or they will not throw it far enough. Once they decide to throw there will be a side view show yourself and the NPC and you will select the percentage of your total power and the angel at which you would like to throw. There's a lot of room for more math related concepts and possible different modes within this game, but that is may basic idea.

I know that we are trying to simplify the wiki, but there is a lot of unavailable information since this change. Tom Gilliard (05/29/2010)

This is a temporary situation while we are switching to the new MediaWiki versions. Our wiki redesign page is Wiki Team/Roadmap/Wiki skin redesign. --FGrose 14:19, 29 May 2010 (EDT)